skip to main | skip to sidebar

Dan hit me up Saturday about wanting to shoot some photos at the park in the morning. I met up with him at 10 the next morning, he was the only one at the park. I had to laugh at him and remind him most BMXer's don't get up that early on a weekday let alone the weekend. The weather was awesome for a January day and quit a few locals rolled in for a good session. Dan clicked away capturing the action and yelled his critiques when the tricks didn't match his expectations for his photos. Couple pics to sample below but be sure to check out his site to see the rest here. 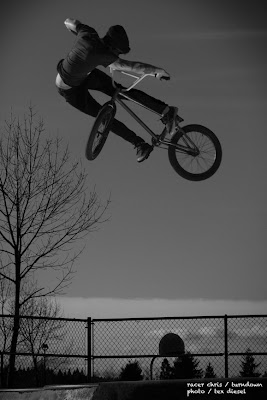 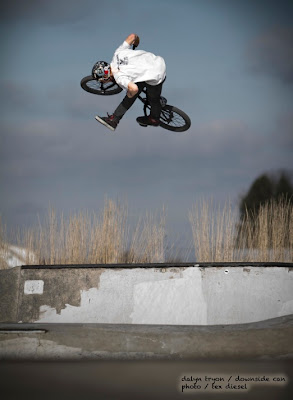 We headed up to practice at the Salem indoor moto track at the fairgrounds last night for Marcus to get his roost on. He hasn't had much time on the bike as of late, the last time on a track was In September I believe. He also hasn't had much track time since switching from his four stroke 50 to the two stroke 65. He has been improving steadily but has usually been timid and slowly pushes himself to new comfort limits. We arrived at the track and did a walk through checking out the track before practice started. The arena is fairly small making for a tight track. I pointed him out a few sections that I thought he should push himself on. A triple step up, step down had a good run up and told him he should at least jump up the first step and a couple tables out of corners that were short enough even with little run up to try clearing. The rhythm section had a tall double into three small whoop style doubles. I was a little nervous for him with regard to the rhythm. He has had very little experience riding tight obstacles like that and the tight proximity of the corral fence along side the track and likely hood of "whiskey throttle" made me worry he might crash. He was in the first practice and the track was still freshly plowed and his typical timid approach got him around the track slowly at first but his lap times quickly became noticeably shorter. He even jumped the step up by the end of the round. Stoked! We have been racing BMX steadily lately and I'm not certain that's what has helped boost his confidence but I'm sure it hasn't hurt. In the second round he continued jumping the step and started consistently jumping one of the two tables. He also started jumping the first of the small whoop doubles in the rhythm after single, singling over the bigger double. He also started attempting the next double. Super stoked! By the third round he was tired and not sure he wanted to ride but went out again any way. He finally jumped the other table with the shortest run up but then crashed on the other looping out getting dragged along into the dirt. I figured he was tired and done then for sure. To my surprise he got up took a few more laps and even double, double, doubled out of the rhythm. Ecstatic! The above clip is one of his earlier attempts. Filming with my iphone was difficult with limited track access and poor angles so excuse the quality.
Posted by Frank at 12:54 PM No comments:

Some of the locals headed up north for some riding while we have a break in the weather. I didn't get to make it but Dan headed up and documented the shenanegans behind the lens. Beevo for as long as he has lived around here had never ridden Burnside before. Popped that cherry. Burnside and Tigard both were sessioned and Dan got some good pics check them out at Diesel's World here. Sounds like he will post more in the Albums section later after he geeks out, tweaking them in Photoshop.
Posted by Frank at 6:05 PM No comments:

3 Bmxers are out of the closet!

So... not quit as suggestive as that sounds, but cleaning out some things I found a bunch of old mags in a closet. Three of them I thought needed sharing as they brought back some good memories. The first is a rare print ad from Solid Bikes featuring none other than little brother, Eric Walter. Eric had been denied entry into Canada on the team road trip and was expressing his thoughts on the matter. Look at him, can you blame them? Ha! This was in issue #4 fourth quarter 2000 of BMX Action that would later become Faction BMX mag. 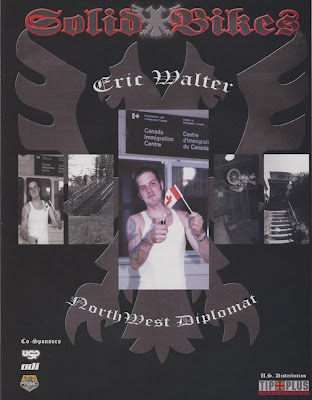 This next one is none other than Riley Peetz on the August-September #14 issue of Faction BMX. Fastplant, Churchhill. 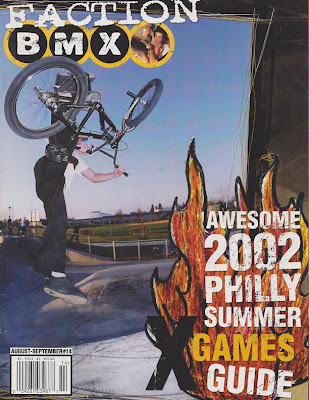 The last on is Justin Inmans February 2003 Ride BMX cover. Gnarly Fufanu, Burnside. This photo doesn't do this trick justice. See it in person and it's a whole different monster. 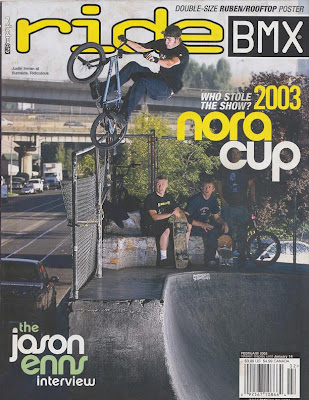 Surfing the Skate Eugene site I learned that less than half of the $870,000 needed has been raised to construct the new park. Large portions of this park will be covered due to its location under the I-105 bridge into downtown Eugene. Check out the design here. Take note of the lines representing the bridge and how most of the park will be under its shelter. There are also lights already in place that will keep this open later on these short winter days. Buy lotto tickets, hit up your rich friends and lets get this thing done!
Posted by Frank at 10:39 AM 1 comment:

Two of my favorite photog's have posted up some of thier favorite photos's from 2010. Check out Jared Souney's photo's here and Dan Wrightington's here. Make sure to check out Dan's album section for a bunch of photos from the 2010 trail season. Also check out the photo's of the Jam for Nathan Sykes Birthday here. There are a shit ton more of those in his album section as well.
Posted by Frank at 10:09 AM No comments: 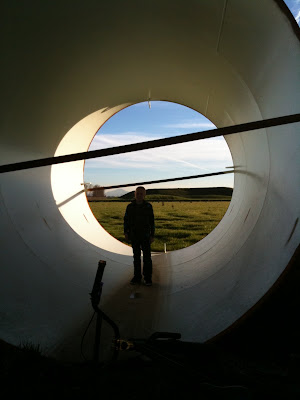 Haven't been on the bike much lately. Hence the lack of posts. Between crappy weather and a nasty cough and head cold it has been a struggle to find time to ride. Finally feeling better the dry but cold weather we have had lately has at least presented a chance to do some riding. Marcus and I spotted the full pipe pictured above on the way to the skatepark after I picked him up from school. A long walk in through damp, muddy fields and through a few barbed wire fences we ignored the ominous "No Trespassing" signs to check these things out. Tight painted metal tranny combined with the condensation made for a surface that was impossible to ride. The crane was sitting next to these looking like the water tank these will make up will be assembled soon so a chance to go back better prepared to dry them out is unlikely. Oh well. Sometimes the shade missions pay out, sometimes not. Unfortunately the park was a bust as well. All north facing transitions that don't get any sun had only just thawed out and were still very wet. Half of the park was wet and slick. Still dinking around on what was rideable was fun anyway. Just glad to be back on two wheels. Guess I have to rally some folks to come ride the unused indoor mini ramp in my shop. You would think that more people would be looking for a dry spot to session but so far no one has hit me up. After one of, if not the best trail seasons in recent memory I have no motivation to ride mini by myself. Speaking of trails, head over to Corvallis/Albany BMX Scene and see how you can help them out with working out a plan with the city of Albany for new trails. It will be a long hard road going through all the red tape it will take to get trails sanctioned by the city but if it works out it could mean good things. Think 9th Street in Austin. Good luck guys. Just glad that the city is considering anything at all after this summers tragedy. Rest in peace Luke. We'll never forget you. For now I guess I'll have two settle for the indoor bmx track to get my dirt fix now that they have started running again after the short off season that follows the Grands. It's been fun even though I went down trying to make a pass for second this weekend. Riley, I think you need to come down and renew the old on track rivalry we had back in day and get your kid racing. What ya think? Definitely hit me up for some hate ramp sessions while it's still there. This will likely be its last winter. Here's a clip of this last summer, hope it motivates some people to come throw some dirt to make this summer at the Backwoods better than last.

End of the Season Jam at Backwoods Trails from Tom Lyons Media on Vimeo.